The next stop on our tour of the world is... SPAIN! Seeing as we can speak a bit of Spanish and it's just next door to France, I thought we'd stop off for a special festival that's held there.

In a village called Buñol, near Valencia, there is a crazy festival that takes place every year on the last Wednesday of August.
It is called La Tomatina and it is the biggest tomato fight in the world!

Thousands of people flock to the village to join in the tomato-throwing event.

In the morning, lorries arrive, loaded with around 125,000kg of tomatoes that have been specially grown for the festival. The special tomatoes are extra ripe so that they are soft. They do not have a good taste. 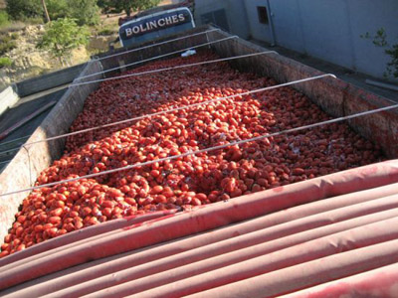 The day begins at around 10am with the 'greased pole.' In Spanish, it is called el palo jabón. People try to climb up the slippery pole, where there is a leg of ham attached to the top. When a lucky person manages to fetch the ham (el jamón), the tomato fight can begin!

The tomato fight (la batalla) usually starts at around 11am and it lasts for one hour. The sound of a firework means that the tomato-throwing can begin.

One hour later, another firework means that the tomato-throwing must stop.  Everybody is in a terrible state because they are covered in tomato juice, seeds and bits! 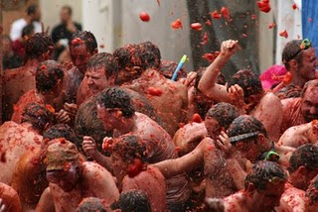 Before the battle begins, shops and windows are boarded up so that they are protected. Afterwards, the messy streets are hosed down with water.

Read about the festival and then write a set of rules for anyone taking part in La Tomatina.

This week, we are getting creative with our writing and I will be asking you to use everything you've been learning recently.

Look carefully at the picture and then complete the task below in your workbooks.

A new type of car has just been invented: The Spider car.

Write about all the cool features of this car.

Then, invent your own cool car and write about its features.

Today's maths will help you understand how to answer questions about information. You might be asked to compare, find the sum (+) or the difference (-).

Watch the learning clip first to help you answer the questions.

This term we are learning about the religion, Hinduism.

Hindus believe that each person has their own, individual soul (an atman), which continues to exist after a person dies.

They believe that their soul is reborn or reincarnated in another body after they die.

I'd like you to draw some 'things that go on forever'

When you've finished - think - do they really go on forever?